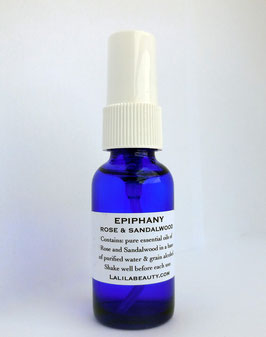 Rose has long been regarded as "Queen of all Flowers" and the symbol of perfection. Through the centuries it has been the most sought after oil for perfumes and is held sacred in many spiritual traditions. Cleopatra, who used perfumes more lavishly than any queen in history, is said to have seduced Mark Antony by dousing herself in rose oil and filling her chambers knee deep with rose petals!

In the Aromatherapy world, particularly in parts of Western Europe, rose is currently used to treat schizophrenia, grief, depression, apathy, and other emotional imbalances due to its profoundly beneficial effects upon brain neurochemistry. In fact, science has shown that genuine rose oil allows for better communication between the two hemispheres of the brain. It has also been shown that rose benefits all organs and systems of the body, particularly the heart and liver. One can not praise rose enough! It is almost a miraculous flower in every way.

Sandalwood (Santalum album) is extremely beneficial for balancing hormones in both men and women. In men, it balances levels of androsterone (a hormone similar in structure to testosterone) and promotes the condition of youthful virility. In women, it mimics the presence of a virile, healthy male's pheromones, thereby helping to balance female hormones.

Modern aromatherapy has found many medicinal uses for Sandalwood. It is used to combat insomnia (due to its effects on the pineal gland, which releases melatonin), depression, nervous tension, and stress. Research in Western Europe has also found that it relaxes brain waves.

Sandalwood has long been regarded as a sacred plant in the Vedic culture of India, and is frequently used during meditation.

Contains: rose ottos and sandalwood (santalum album) essential oil in a base of grain alcohol and distilled water. Vegan.

To use, shake well and spritz on wrists or neck. Or spray on cotton clothing and/or bed linens for longer lasting scent.

Our colognes do not contain any emulsifiers. Shake well before each and every use.